When ye were sleepin' on your pillows,
Dream'd ye aught o' our puir fellows,
Darkling as they fac'd the billows,
A' to fill the woven willows?
Buy my caller herrin',
New drawn frae the Forth. 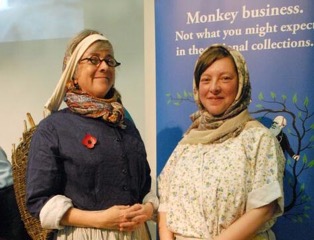 My Newhaven fishwife's back creel on the left - worn at a performance by local choir 'Callerou' in the National Library, Edinburgh
Image by Sheila Masson Photography 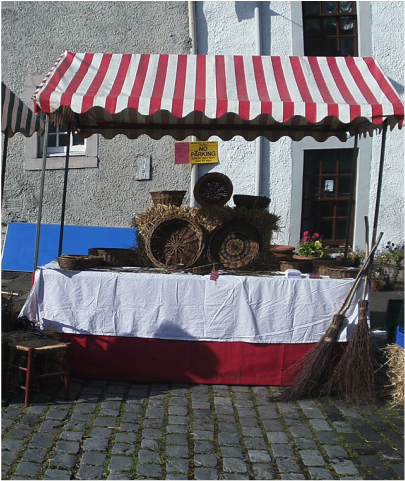 Prophecy at Newhaven
In the summer of 2012 I had a stall at a local festival at the fishing village of Newhaven.  With me I had some baskets from Anna Coldham and ‘Harry Potter' brooms and baskets from Northumberland makers.  I sat down and made willow and rush fish all day with plenty of children and some keen adults.
The festival was run by locals who are moving into refurbished and new build properties in the location and want to celebrate this fascinating old village, squashed in between busy Edinburgh and  Newhaven harbour on the Forth estuary.
The harbour used to supply fresh fish to the city, carried up by fish wives in back creels.  They are depicted in some of the earliest photos we have from the 1840s when the activities of the fishing community attracted the attention of Adamson and Hill, pioneer photographers.
I have heard many stories about the fishwives, once described to me as ‘a force of nature’, and how they used to carry up to 10 stone of fish at a time – the weight of a fully grown adult.
There are tales of how they used to go by foot, train, bus and tram and eventually by van to their customers, some of the rounds continuing to this day.
At Newhaven station there was a little window in the booking office opening onto the platform so the fishwives could buy their tickets without coming into the waiting room with their fish.


In time the fishing trade collapsed in line with an old prophecy about the great willow tree that grew and flourished at Willow Bank , Newhaven for many years.

‘When that tree shall decay the open sea-boat fishing trade shall also die away,"

In the 1950s the village was much altered in the name of modernisation and improvement and many of the local people were rehoused elsewhere.  A busy road cuts between village and harbour making it even more difficult to envisage it in its heyday.  At one time a charming local museum was set up on the harbour which was full of interest and had some original and some replica baskets as well as photos and stories.  It was well supported by the local people but in the end it had to close.
(Update 2015 -some items from it are kept in the 'Wee Museum' inside the primary school.)


I was able to photograph some of the creels kept in the Edinburgh Museum Store and am making a replica at the present time. 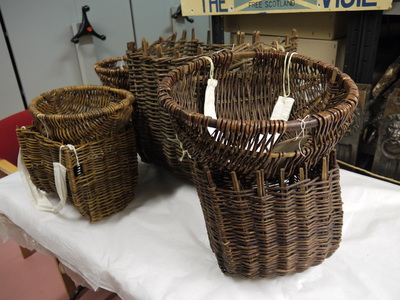